interview with Philip McKibbin
Dom Mallard (Waikato, Ngāti Hine, Ngāpuhi, Ngāti Apakura) is an animal rights activist and musician. She works for Anonymous for the Voiceless, an international animal rights organisation. She lives in Ōtautahi with her husband Kelvin, their canine companion Eva, and Ringo, their feline boss.
Tell me about your work for Anonymous for the Voiceless.
You're an abolitionist. What does that mean, and what are the implications for how you live your life?
You went vegetarian when you were 13. What led to that decision?
​So, essentially, once I learnt that I was eating the very things that I cherished, I simply stopped. I remember saying to Mum, ‘I’m not eating meat now.’ She said, ‘Like a vegetarian? So what am I supposed to feed you?’ Haha, she was less than impressed!
​At that age, I knew nothing of what animals experienced in death; the notion had never actually occurred to me. I didn’t know any other vegetarians. The Internet was at least two decades away, so I hadn’t been exposed to images or information. I just didn’t like the thought that an animal who had once experienced life could now be served up to me as food. It seemed really weird and kinda gross.
​Dad worked in a slaughterhouse. Although I don’t recall so much from my childhood, which was a very unsettled one due to domestic violence, I believe that he brought the violence of his work back into our whare. I do have vivid memories of him walking through the door at the end of a day of work, his white coveralls smeared red; his gumboots, various shades of white and pink, standing neatly at the back door. The knife set would usually be unwrapped and laid out on the bench with the sharpening stone, and he would set to work, readying his tools for the next day. Dad wasn’t a drinking man and he kept his ‘nose clean’, but he was often angry, and I can’t help but think that he felt a certain amount of shame.
​As a kid, I never knew what he did for a living, but he, like every other dad (and some mums) in our town, worked at ‘The Works’. It wasn’t until many years later that I actually learnt of the horror he walked into and participated in, every day.
And now your whānau is vegan – ka rawe! How did that happen?
How do other Māori relate to your veganism?
That’s an interesting question. Well, my experiences have been on the whole, positive. I have had some pretty awesome conversations with Māori during my outreach at the Cube of Truth. Not just kai-focused, either. Almost on another level, a deeper understanding from a spiritual perspective, that connection to Papatūānuku and to all that share her.  Discussions around kaimoana can be a little more challenging – culture becomes a bit of a sticking point here – but overall, as long as the person isn’t reliant on animals to make a living (don’t forget I'm in dairy country, Canterbury, so you don’t have to look far to find someone who is in that industry), he pai te kōrerorero. Especially speaking to wāhine and mums, explaining that there is so much more information out there now on how to nourish our tamariki with what comes from the soil, and how I wish I would’ve known back when my kids were young, the things that I do now. As women, we relate; as Māori women we connect; and as mums, we empathise with one another. We talk about the financial strains of feeding our whānau, keeping everyone sustained and interested in kai, and the empathy towards animals that is so often apparent in our tamariki.
​I also have whānau that are intrigued by our choices. Like most vegans, I often struggle to have the conversation with whānau members for fear of sounding preachy or ‘judgey’. We tend to get more emotionally invested in these conversations, and they don’t always end up great.  Again, social media has been helpful here. I have had three whānau members all reach out to me saying that they have been impacted by my Facebook posts, and have chosen to become ethical vegans. My dad is as stubborn as he ever was, but he supports and respects our decisions to be vegan. Whenever he comes to stay, he brings soy milk and vegan sausages, so I take that as a win! Haha! 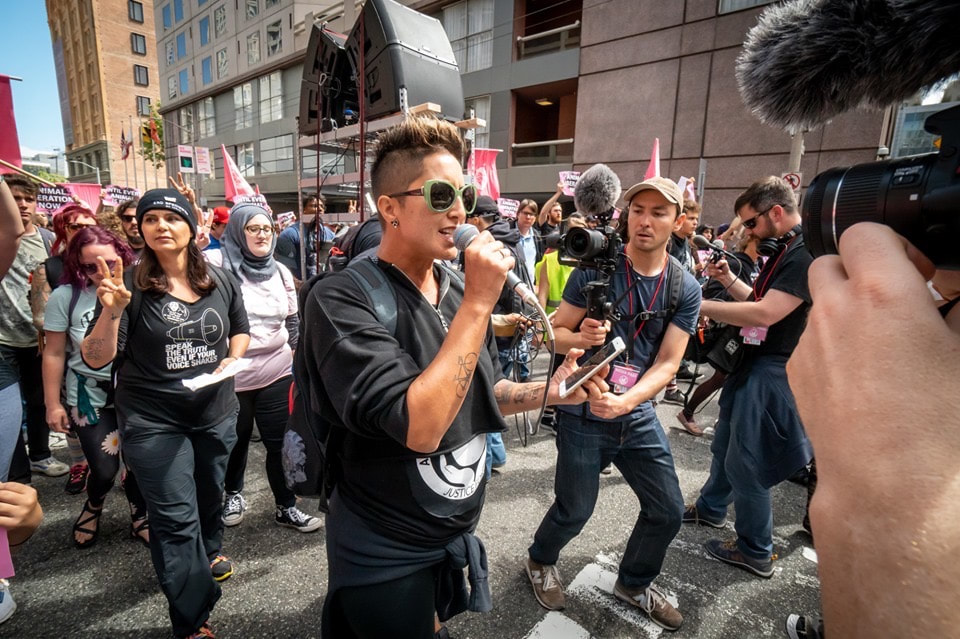 Dom leading a protest against animal exploitation.
What are some of the challenges involved with your animal rights work?
​The human aspect is probably the most challenging. At both an activist level – e.g. on the streets, speaking with people who refuse to accept the truth – and working with people within the movement who at times lose sight of the goal. It’s all normal human stuff, and activists are no different to anyone else, but there are times when I find myself getting frustrated by the distractions of everyday life and human wants.  I also feel challenged by the lack of ‘push’ in some parts of the vegan movement such as the big organisations who encourage incrementalism, choosing to side step the vegan message through fear of losing public or monetary support.
As well as campaigning for animal rights, you're a musician. What are you working on at the moment?
​Yes, that’s what my husband and I have raised our children on – musicians’ wages! It's also what affords me, now, to dedicate so many hours to my animal rights work. I'm a covers musician, so the only project I have ahead is a super-busy summer of gigs and putting out promotional material for our band.
​My kids are very musically talented, so it’s a joy watching them developing and producing their own sounds. 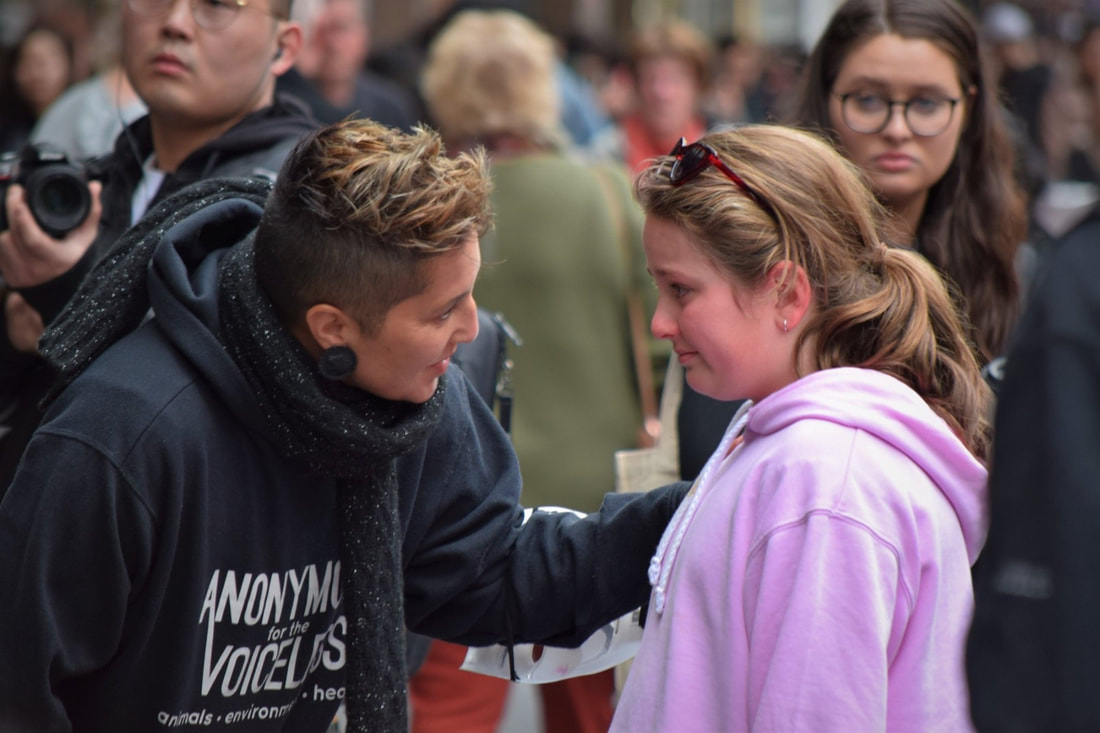 Dom engaging in outreach.
With all of the work you do, how do you ensure that you're well-nourished?
​Well, since taking on this new role, my husband has been keeping me nutritionally nourished. (A big shout out to my tāne, Kelvin!)
​Emotionally though, I can become undernourished if I’m not careful. As you can probably imagine, as activists we are often faced with some pretty brutal realities, and for some, depending on how involved we are in activism, it's the daily sensory assaults that can really threaten mental and emotional health. My husband often says how I’m an all or nothing person – when I'm in, I'm 100% invested, and it can be hard to pull me out. That’s where I am with animal rights. I believe that I will be this way until total liberation is secured for the voiceless and the vulnerable. Until then, keeping my wairua strong and healthy takes effort.
​Interviewed: October, 2019
Published: January, 2020