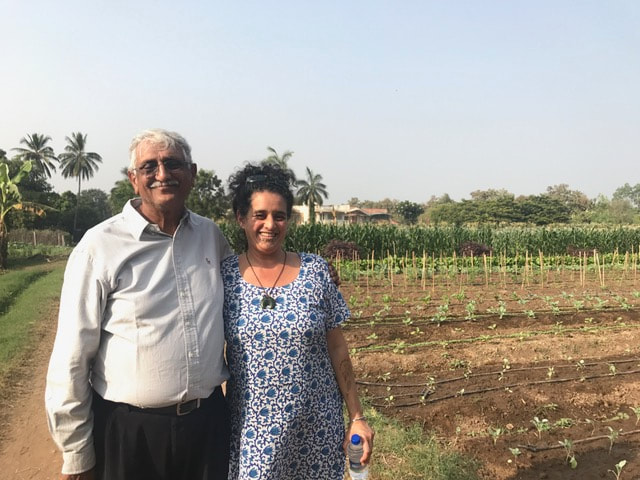 Jessica with Mr Patel, President of Biodynamic Association of India, at his farm in Gujurat, India.
How has your Māori and Indian whakapapa influenced the way you think about kai?
​In so many ways. I’m adopted, and so it’s my birth mother’s side that’s Indian, and she’s from – or, we’re from – Gujurat. I’ve been back to the village and seen the village life, and it feels like, in lots of ways, that it’s in my bones. Really subsistence life: in the morning, past the front of the house, people are walking with the harvest for the day or off into the fields and the paddocks, and it’s very real. It’s like, ‘We have to go to work, and we have to work for the food. We have to tend to the land in order to be able to eat tonight.’ And there’s something about that simplicity, and that honesty, and truth in that, that has integrity, and that very much resonates with kaupapa Māori and standing in that integrity as a Māori Indian woman on the whenua producing kai.
​I’ve been really lucky over the last 20 years to have made a lot of food connections with some amazing farmers and activists in India, including one of my sheroes, Vandana Shiva, who is part of the group Navdanya, which is a seed saver movement along with groups like Diverse Women For Diversity. I have learnt from these connections about the importance of seed diversity and the importance of ensuring diversity within seed stock. It is important to retain not only in our seed source, but also the ecological knowledge as well. It’s one thing to save seeds and say, ‘Now I’ve got a seed bank,’ but have you got that diversity, that intergenerational diversity in your community to hold that knowledge and to keep passing it down?’ And 20 years ago, when I was starting to hear all that kōrero, it just blew me away – about the role that women played in traditional communities, subsistent communities, indigenous communities, for being knowledge holders of seeds, plants, foraging, and it made me think, ‘I didn’t grow up with any of that.’ That’s all been learnt, so I’ve been really drawn to the politics that continues to come out of India, particularly in the ‘70s with the fight against the Green Revolution, the mass farmer suicides that have happened in India because of the introduction of pesticides and genetic engineering, and the impact of mass patented agriculture on farmer livelihoods. You plant one crop of GE cotton, Bt cotton, and then you’re in this vicious loop of needing to buy pesticides and the fertilisers to keep the ground fertile, and then you’re locked in through an economic model that is absolutely corrupt, and then you’re having to purchase those seeds again because they don’t self-germinate. There is something incredibly violent about modern agriculture that is a fracture in the natural rhythm of life.
What impact has colonisation had on traditional Māori plant crops?
I think we’ve lost a lot of knowledge. First of all, our land’s been taken, so we’ve lost our ability to connect with our whenua. The most productive pieces of land in New Zealand are not owned by Māori; they were confiscated and stolen. We often talk about marginal, multiply-owned Māori land. We’ve been left with the least-productive growing areas. So I think that’s really interesting when thinking about Māori plant crops and food secure systems for whānau.
​Where do you start? Colonisation, agriculture. I think it’s about the food system, really – the impact of colonisation on the whole food system. Percy Tipene, Founder of Te Waka Kai Ora, used to talk about how our puku is really colonised, and that we’ve lost the ability to eat. I know my son wouldn’t eat lots of the traditional fermented foods, or things like that. I don’t think he could down a kina, but his father could; he’s from a different generation that is very urbanised and disconnected from his mahinga kai or taonga kai. In the everyday, we have to enter a colonised food system in Aotearoa just through the purchasing of kai that is driven by a capitalist system. 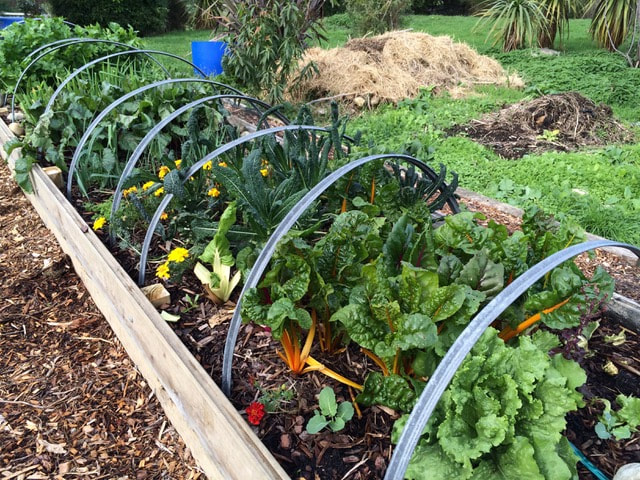 Raised beds and compost piles at Papawhakaritorito.
​Māori food sovereignty for me is about returning to eat the landscapes which we’re from. It doesn’t matter to me that on our little farm I’m growing European vegetables along with some kai Māori; it is really about returning to eat this landscape because I’m growing the soil on this land, I’m tending it, I’ve got a relationship with it, I’m nurturing the animals that provide the manure to make things grow. So I think it’s really about that type of connection. Whereas our current food system such as the experience we have when we walk into Pak‘nSave, we’ve got absolutely no relationship with the whenua or the growers, and we have to buy it in plastic – what the parakore movement term ‘colonial waste’. So having an analysis around that. And there’s a privilege with this – there’s a class privilege with this – to be able to have an analysis. A lot of our whānau don’t even have enough pūtea to feed everybody in the household in the everyday, so there is a privilege with that, and what do you do with that privilege? For me, I have to think about, What’s the marae that’s closest to me? Where are the food banks? How can I help? If we’ve got surplus, where do I share it? It is this practice of manaakitanga, to elevate the mana of whānau, so you have to bring that into play as well.
​But our food system is broken. I speak on behalf of Te Waka Kai Ora, and we’re advocating for food systems that are diverse, that are based on collectivism, that are about regenerative economies, about biodiversity, that are about parakore – so, they’re about waste reduction, closed-loop systems. On our little farm, we basically generate everything we need to do everything. So, getting firewood today, which is just all the gorse that’s on the ground that’s all dead. The manure comes from the cows that are on the farm. We’ve got nitrogen – green stuff – for putting in the compost. We cut hay, so there’s your carbon. Food, saving seeds, so we don’t really need to go off and buy things. This notion of impact of colonisation on agriculture, there’s a big unlearning that we need to do, but it’s sensory as well. It’s every part of us that needs to be undone around our relationship with food. It’s a big journey – it’s a life practice, because it’s seasonal, and sometimes this time of the year – I was just saying to my partner earlier this morning, as it’s spring and there’s so many weeds around, but actually, it doesn’t really matter, because they can all just cycle around, we can just let everything go to seed this year and not do anything, and it’ll all just cycle around for next year. And that’s not a bad thing – that’s not a bad thing to not be in control of the agriculture, but to be a part of it. And I think that’s a really important distinction in Hua Parakore agriculture. It’s that, actually, we are a part of it, we are it. Is there any separation? There’s no separation, really, from it – we are nature, nature is us. 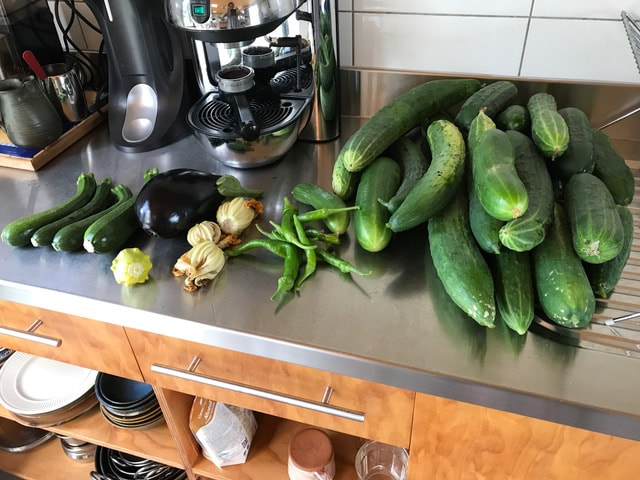 Summer harvest from the poly tunnel.
What is Māori food sovereignty, and how do our practices around kai relate to tino rangatiratanga?
​Māori food sovereignty is about food-secure futures for whānau. It is about returning to eat our cultural landscapes in ways that ignite our kaupapa Māori sensory faculties, in all aspects of ourselves. In terms of exercising tino rangatiratanga around food, first up for me would be to have a relationship with the food. So, Where did it come from? How did it get there? Who grew it? Where’s the seed from? Are we eating in community? How are we eating? And this is where Ayurveda and my Indian side jumps in, because it’s about that mindfulness in eating, bringing conscious awareness to eating and how we’re eating. I was at a hākari recently, and it was just beautiful, all this beautiful hākari kai on the table, and it was a big, buzzy hui, about 150-200 people there, but you get to the table – and this is not a comment on manaakitanga or anything, it’s more a comment on conscious eating – you get to the table, so many people, we’re all squishied up, and I know there would have been karakia before we went into the wharekai, but then it’s just like the Vikings, you know? It’s like we’re eating mindlessly, and just hoeing into all this food. 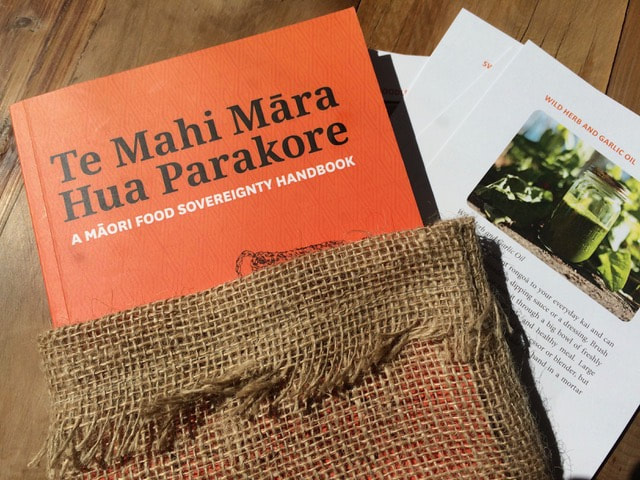 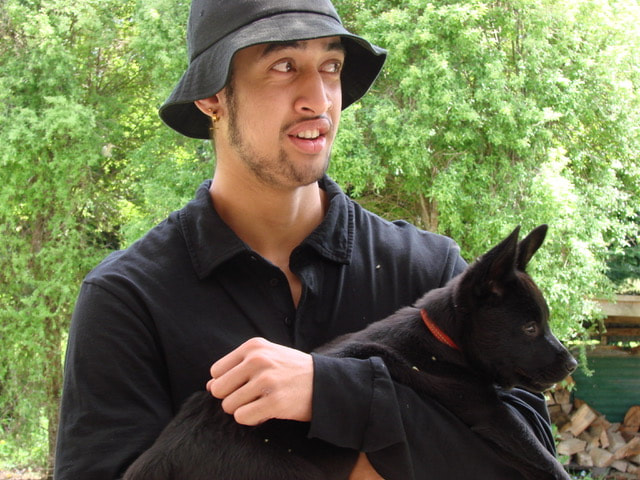 Jessica's son Uenuku Mau with Tahi as a puppy.
You use innovative techniques to deter animals like rabbits and aphids from your māra. I'd love to hear about those.
I do lots of companion planting in the māra. These are plants that share a beneficial relationship, such as planting marigolds with the vegetables to bring in beneficial insects.
​It’s like Watership Down out here at the moment. It’s terrible. So I’m not very good at deterring rabbits. I don’t know how you deter rabbits. We’ve done nothing, really – I mean, they’re everywhere. We drove into the paddock today, and there were literally 30 that ran out across the road. I think they’re a part of the ecosystem in some ways. I mean, I’m not farming for profit; I’m on a piece of land to bring it back to life. If that means rabbits want to come here, well, that’s alright, as long as they don’t get into the garden up at the house, and they don’t at the moment. We built a polytunnel a couple of years ago. I was having a lot of issues with pūkeko, rabbits – you know, everything was in the food. And now I’ve got an indoor growing tunnel, cos I’m not in a great climate where I am. I’m not in the Far North of the Hawke’s Bay, so it’s a short growing season. So that’s really changed up growing, being able to grow indoors.
​How else do we deter things? We’ve never put a trap out for a possum. We’re not very good. Yeah, I don’t think I’d want to deal with an animal in a trap – at all. I don’t know. Talk to me in 10 years, I might be drowning in rabbits!
​Interviewed: October, 2019
Published: December, 2019