interview with Philip McKibbin
You've been vegetarian for many years now. What initially drew you to plant-based kai?
​Even as a child, I didn’t enjoy eating meat, I’d stopped eating eggs at 16, however, when I was 21, I moved to New York, and at that point, I decided to not eat any animal products at all. I went completely vegan because I had no sense of where the food was being sourced from or how it was being produced. Food production in the States was on a scale that was so much bigger and more horrifying than it is here in Aotearoa. That was in the ‘90s, and there weren’t a lot of everyday options available for understanding where your food came from, so because I had no idea where my food is sourced from and how the animals are treated I decided to go vegan.
​I grew up on a small family farm, which had a few cows, sheep, pigs, chooks, and my Grandpa liked to home kill. A lot of our kai came from our gardens and orchards and my grandparents’ and my mum and us kids’ households were fed in a pretty self-sufficient way. So I came from a very productive kai-producing family farm, and I was super lucky, actually, but that set me up to have a deep sense of my connection to food.
​I drove across the States before I moved to New York, and I got to see some pretty horrific pastoral care going on. Pastoral ‘care’ – not.  Like, two days’ worth of driving through wheat fields, then long, long roads of cattle and just farms of pigs, et cetera – so just on a scale that is massive. Then I arrived in New York, a lot of the food looked orange and grey and yuck, and that was my reason for becoming vegan. I stayed vegan for about three years, but I wasn’t a very good cook then, so I wasn’t eating very well, and there wasn’t that much literature around – I mean, the Internet wasn’t even really available then! (laughs) And there was only so much the enchanted broccoli forest cookbook could provide. I don’t know if I was actually substituting it with healthy options. So it’s been a process of just negotiating that space.
​Initially, it was firmly centred in where this kai was being sourced from, and the production around it, and then the mechanisation of animals and the mechanisation of the food industry, et cetera, which I don’t at all like. And with that, we now know – and I think even then – the impact it was having on our environment. So that happened, and I think when you decide to shift something like your diet, there’s a consciousness that goes with that shift, and there was also a spiritual dimension that started to work within me, that I didn’t want to eat animals. That wasn’t the initial motivation, I wasn’t coming from a Buddhist place or anything like that. I felt strongly that we have a duty of care to look after the environment.
How does your vegetarianism connect to your Māori values?
​That would be a question that I could answer now, but it wouldn’t be something that I anticipated. It wasn’t, obviously, a reason for me starting to be vegetarian, or taking that position. But now that I am much more firmly affirming my Māori values, then I can, kind of, think about the relationship between vegetarianism and the relationship is simply whanaungatanga. We’re all connected to everything, so the way that we are connected to our food sources is really important. And for Māori, that’s always been important. Our relationship to Papatūānuku and living in this environment sustains us, it nurtures us, it takes care of us, and we think of that as a dynamic relationship. So whanaungatanga would be the main thing to think about there – whanaungatanga being the actual connection between other living beings. And our whakataukī all around Matariki, for example, are about thinking about how we are preparing ourselves for the seasons ahead and the year ahead; and there’s a lot of focus on watching the environment and watching the stars, thinking about whether we’re being provided for in these particular contexts – whether it’s going to be fresh water, what that’s going to be like, whether it’s fishing in the moana, whether we’re going to be planting at particular times, late seasons, et cetera. Obviously there is meat in that and it’s not all vegetarianism, but – but – what is in that for me is a mindfulness and a connection, and whanaungatanga to the environment. That’s what I take from that idea.
What are the benefits to you and your whānau of plant-based kai?
​For me, it’s just the environmental benefits. I’m sure it’s quite healthy for me, but because I’ve been like this for so long, I wouldn’t know. (laughs) I mean, I’ve been vegetarian for 25 years or longer now. Eating meat just was not a thing for me. I was brought up in an environment where that was available, but I have no desire to eat meat whatsoever. The only thing, in terms of eating plant-based kai, is that you have the hauora of the vegetables and the food source and it’s super healthy for you, and I love making kai that nourishes ōku hoa me tōku whānau. 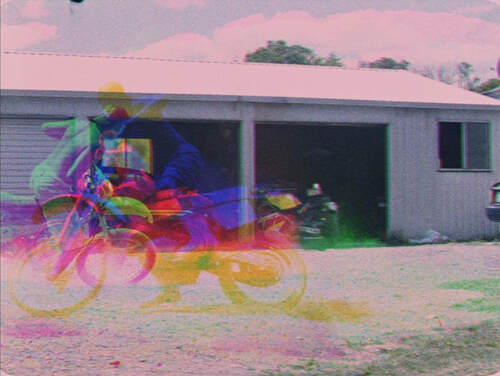 Still from 'This Is Not Dying'.
How do you carry your vegetarianism with you in predominantly Māori contexts?
​By eating around the meat in the hāngī, in the boil-up, et cetera. (laughs) I find that the marae is the hardest place to have dietary difference. If it’s my own marae, I can just take my own food and stash it in the fridge. But there have been situations – and even recently – where I’ve not been able to eat much, and when you’re on a noho marae for three days and you end up eating potatoes for three days, it’s not healthy. So I think we really need to overhaul that space.
​Auē! It’s just really hard. I mean, I’ve been on the marae, and we’ve had a working bee there, and the kai has been a pile of butter, a pile of bread, and a pile of steaks, in a row right down the table – it’s like, that’s super, super unhealthy. Āe, the boil-up and the hāngī, I might sit at the table; I do try to eat kai if it’s offered because that’s the manaakitanga of the people that have offered it, but I can’t eat around kai drizzled in meat. I end up eating a lot of spuds and a lot of white bread, basically.
You told me recently that you don't think Māori, generally, will never be vegan. Why is that?
Just because of the above reasons, if there is cultural shifts I think it’s going to be around some consciousness and thinking about farming practices’ impact on Papatūānuku. So, whanaungatanga, or thinking about the relationship of where your food sources from. But our whakataukī tell of our connection to and reliance on kai moana, kai manu and sourcing fish and birds. ‘Ka kitea a Matariki ka rere te korokoro’ – ‘When Matariki is seen, the korokoro migrates and is slain.’ Or, ‘Ka rere a Matariki, ka wera te hinu’ – ‘When Matariki appears, the kererū is caught and cooked.’ I think that tino rangatiratanga is connected to food harvesting practices.
Diversity of experience and inclusion are recurring themes in your art. How does kai connect to these ideas?
​Well, kai doesn’t really come into my artwork at all, but– Oh, hang on a minute. I’ve just done a work around water, and wai māori. It’s just about how we look after Papatūānuku and our hauora. I’ll just talk about my example with my hapū, kaitiaki of our puna. We do everything that we can to look after our puna. That defines who we are. That’s what our people do. And in doing that, we nurture the environment around it. So it’s incredibly healing. It’s really important that we engage in that space, and that we look after the water in order to look after the kai source, in order to look after the environment, in order to look after our people – and that’s cyclic. So when we’re talking about sovereignty, yes, taking care of one thing will actually have a knock-on effect if you attend to one aspect. Like, for us, it’s looking after our puna.
​My art practice is really about tino rangatiratanga. What’s at core in my practice is things like, ‘What does a self-determined image look like?’ How do we self-determine, and how could we construct an image? And sometimes I’m looking at the technical aspects in that space. I’m interested in cyclic time; I’m interested in the rhythms of an environment; I’m interested resisting measured and capitalist time. I guess I can see a connection between the time to make food, the time to grow food, the slowing down and attention I want to bring to my films. But yeah, the relationship to time in the filmmaking and kai, if there’s a relationship between the two, it’s ideas about what is considered productive in a Western capitalist society, driven by unsustainable consumption that is causing havoc on our whenua and moana. 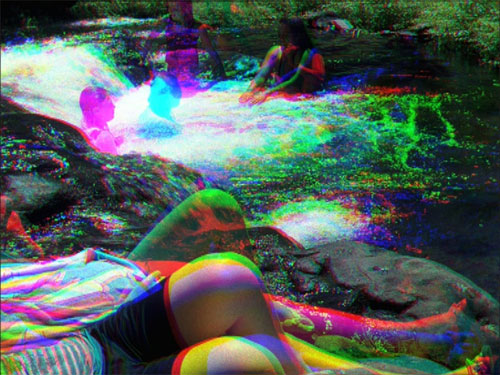 Still from 'This Is Not Dying'.
What connections do you make between vegetarianism and your tino rangatiratanga work?
​Our self-determinacy for Māori being Māori is everything to me and in all my work – hopefully I’m trying to do it in my practice. I ask myself, ‘How do we self-determine in this world?  What does that look like in a film? ’ For Māori, it’ll be the values that underpin being Māori: tino rangatiratanga, manaakitanga, whanaungatanga, aroha, looking after the wairua of the whenua, hauora... all of those things. That’s imperative to our sovereign space, and I see the connection that I chose to be vegetarian because that is also imperative for me, having whanaungatanga with the environment that I’m in.
Some people are critical of vegetarianism because they see it as being something that you can only do from a position of privilege. How would you respond to that?
​Oh, I’m working from a position of privilege all the time. It’s a privilege to be Māori. It’s a privilege to have whānau and whakapapa. You could invert that sentiment really easily, and say, ‘Actually, it’s a privilege to be able to care about these things and I do and will always.’ We’re lucky to have this relationship, and we should care about it. Privilege is, of course, usually wrapped up in where power lies, and I want ideas of what constitutes privilege questioned and redistributed. I don’t actually think there needs to be any power dynamic going on here. Unfortunately, privilege as it is at the moment aligns with capitalist Western aspiration, but that type of ‘privilege’ is ruining this planet.
​Good, healthy food should be accessible. That would be something to aspire to for tino rangatiratanga. Yeah. If you could sort that out, that’d be great. (laughs)
​Interviewed: October, 2019
Published: February, 2020