interview with Philip McKibbin
Tara Jackson (Kāti Māmoe) is the Executive Director of the New Zealand Anti-Vivisection Society (NZAVS). She holds a Bachelor of Science in Zoology and has a strong passion for animal rights, human rights, and environmental protection. She has experience working with other NGOs, campaigning and fundraising. Previously, she has been involved with organisations such as Greenpeace, WSPA, the SPCA, and SAFE. She also co-founded and runs the Facebook page A Guide to Vegan and the Animal Justice League.
https://www.NZAVS.org.New Zealand/
https://www.facebook.com/aguidetovegan/
https://www.facebook.com/theanimaljusticeleagueNew Zealand/
​The list of examples above happen here in New Zealand, and each year we still use approximately 300,000 animals for research, testing, and teaching purposes.
​My passion and drive to work so hard for this particular cause is fuelled by a combination of my love and respect for animals and my interest in science.
What led to your passion for animal rights?
​Like most people, I love animals, and I always have. When I was a little girl, and before I even knew the word ‘sentience’, I naturally understood and recognised that animals were sentient – that they feel pain, fear and happiness.
​I’ve always had a strong passion and sense of responsibility to protect animals, which I think is quite normal for people to have, especially children. A lot of people have it for cats and dogs; I have it for cats, dogs, mice, rats, rabbits, possums – all animals.
​I remember saving the garden snails from my dad, giving my dog a manicure in her kennel to cheer her up after she’d been told off for digging in the garden, sneaking out after dinner to feed the stray cat who mum specifically told me not to feed… I guess I’ve also never really had a problem with breaking the rules when they conflict with the right and morally just thing to do. 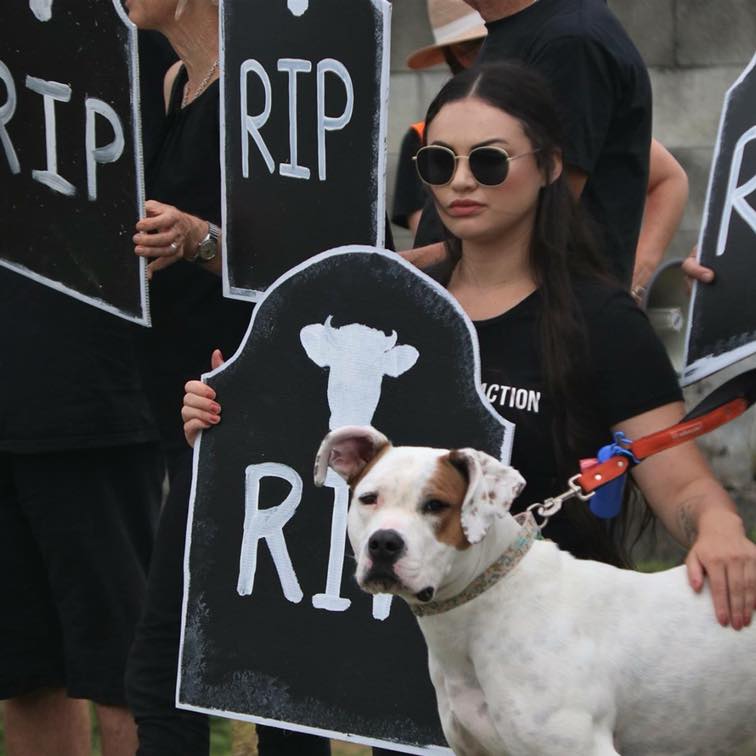 Tara protesting against animal exploitation.
The NZAVS has seen a lot of victories. Is there one that you’re especially proud of?
​I like this question a lot! I’m really proud of NZAVS and the important work that we have achieved. When I say ‘we’ I mean the full team – NZAVS supporters, volunteers, and staff (both present and past).
​There is one particular victory that has made my heart so happy and has made me feel as though I am exactly where I’m meant to be in life.
​The not-so-happy ending to this part of the story is that my little buddies were gassed and killed at the end of the paper. All 50 of them had their lives cut short. This wasn’t something that happened without protest, by the way – I complained to multiple staff and begged to take them all home. I was even told that if any of the mice were missing, it would be obvious that it was me who took them. This wasn’t an accusation made in vain, as I was contemplating breaking them out, and not doing so is one of my biggest regrets to date.
​I’ve since been made aware that rehoming the mice was beyond the control of these staff members, as there were different rules in place preventing some animals from being rehomed, due to previous rehoming of animals to students resulting in some bad welfare outcomes.
​Fast-forwarding a few years, and I was now working at NZAVS co-running the ‘Out of the Labs' campaign with HUHA. The focus of this campaign was to encourage the rehoming of animals who have been used in research, testing or teaching (we still do this now as it’s an ongoing campaign). Thousands of animals are killed after being used for research, testing, and teaching in New Zealand every year. We needed to do something to protect these animals from being needlessly euthanised. After a lot of lobbying and awareness-raising, we had an incredibly positive outcome – the Ministry for Primary industries announced that they were going to actively start encouraging the rehoming of animals used in research, testing, and teaching in New Zealand!
​Because of this, we were given the opportunity to rehome a group of mice from a university – not just any university, but from exactly the same university that I studied at. In fact, the mice that we got to rehome were used in the exact same paper that I had taken several years ago! So, because of our campaign and the progressive views of some staff at Massey University, we were able to change the fate of not just 50 mice, but all mice who will be used in this particular paper moving forward. Now at the end of each year, the mice used are rehomed instead of euthanised like my little buddies were.
The mice have now gone on to live amazing lives full of love and happiness. I know this with certainty because I adopted six of these mice, and they are actually beside me as I write this. They make up six of the many reasons why I work for NZAVS! You can read more here.
Do you see connections between your work for animals, and Māori rights?
​I see common trends of injustice and the dismissal of obvious solutions because of money and greed.
​As I write this, a roadblock and gala is happening at Ihumātao. I wish I could be there to add another voice to their powerful chorus, but unfortunately, I’m stuck in bed sick. I hope the day is successful for the defenders of Ihumātao!
In campaigning for animals’ rights, have you encountered people who say we should address New Zealand’s social problems – such as child poverty, homelessness, and our racist justice system – before we think about animals? How do you respond?
I don’t think it has to be one or the other, and that kind of mentality makes me a bit sad. While we focus on defending animals, we are also aware of the many other important issues and injustices that exist in New Zealand and around the world. I am just as fiercely against racism and the discrimination of disadvantaged and marginalised people as I am against animal exploitation.
​I have been asked multiple times what I’m doing to help end other injustices. I normally respond by highlighting that I’m one person and that solving all of the world’s problems doesn’t fall upon me alone. I’d also encourage whoever is asking me that question to consider starting their own campaign in whatever area they feel passionate about.
​We can all work on different issues aimed at making the world a better, fairer place at the same time, and we should support one another as we do that.
You run a fantastic Facebook page called A Guide to Vegan. How long have you been vegan, and why did you make the change?
​I’ve been vegan for around six years now, and I was vegetarian for approximately 10 years before that. I went vegan when I found out about bobby calves, the negative impact that dairy farming has on our environment, and in general just how awful that industry is to animals. In short, the more I learnt about the animal agriculture industry, the more I cut it out of my life.
I once thought that being vegan was extreme and that it would be too hard to do. Now I know how reasonable and easy it is, and I get to share that with people on A Guide to Vegan. A Guide to Vegan is an online resource that promotes vegan products, recipes, businesses and restaurants in New Zealand. All products that are featured on A Guide to Vegan are vegan-friendly, meaning they are free from animal-derived ingredients (i.e. no honey, no vinegar derived from dairy, no sugar refined from bone char, no emulsifiers derived from animal products, etc.). 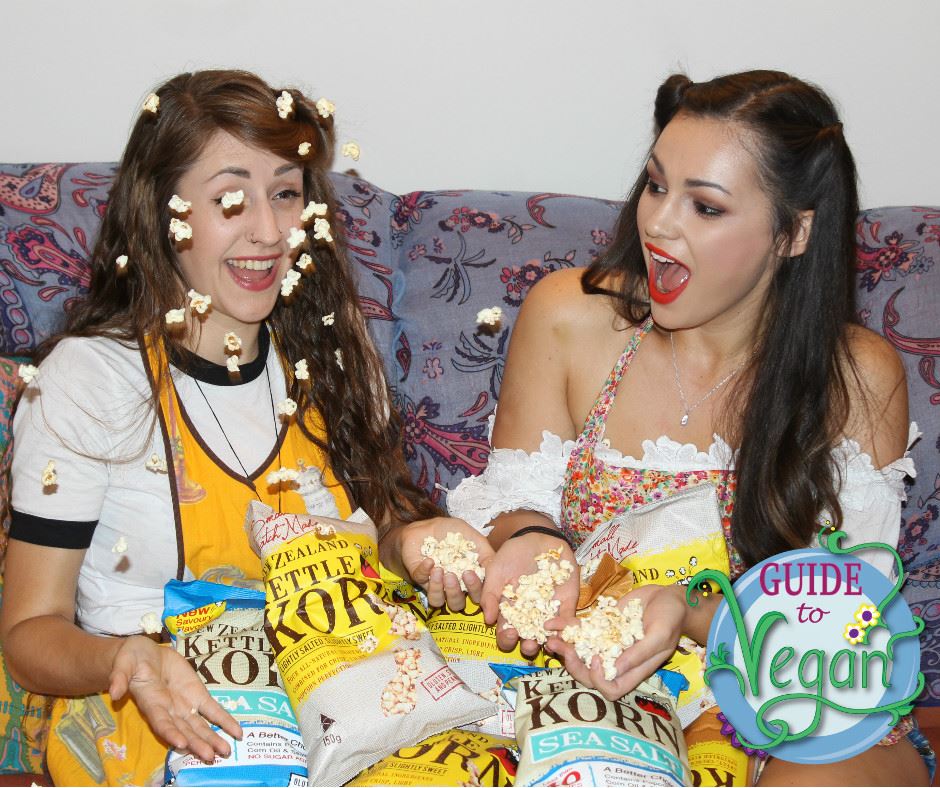 Tara with co-founder of A Guide to Vegan Charlotte Drene.
How does veganism relate to your stance against animal experimentation?
​I fundamentally believe that animal exploitation is wrong. This relates to both the use of animals for food and the use of animals in experiments, as these industries are reliant on the exploitation of animals. Also, this is particularly relevant in New Zealand, as thousands of cows, sheep, fish, and other animals commonly used in farms are used every year in research aimed at trying to sustain and enhance the animal agricultural industry.
For example, as far back as I’ve looked, cows have been the number one used animal in New Zealand for research, testing, and teaching purposes. Globally, the main animals used in science are mice and rats, so this really shows the huge reliance and investment New Zealand has in animal agriculture, particularly in dairy farming. The latest stats from 2016 show us that cows made up over 40% of the total number of animals used! 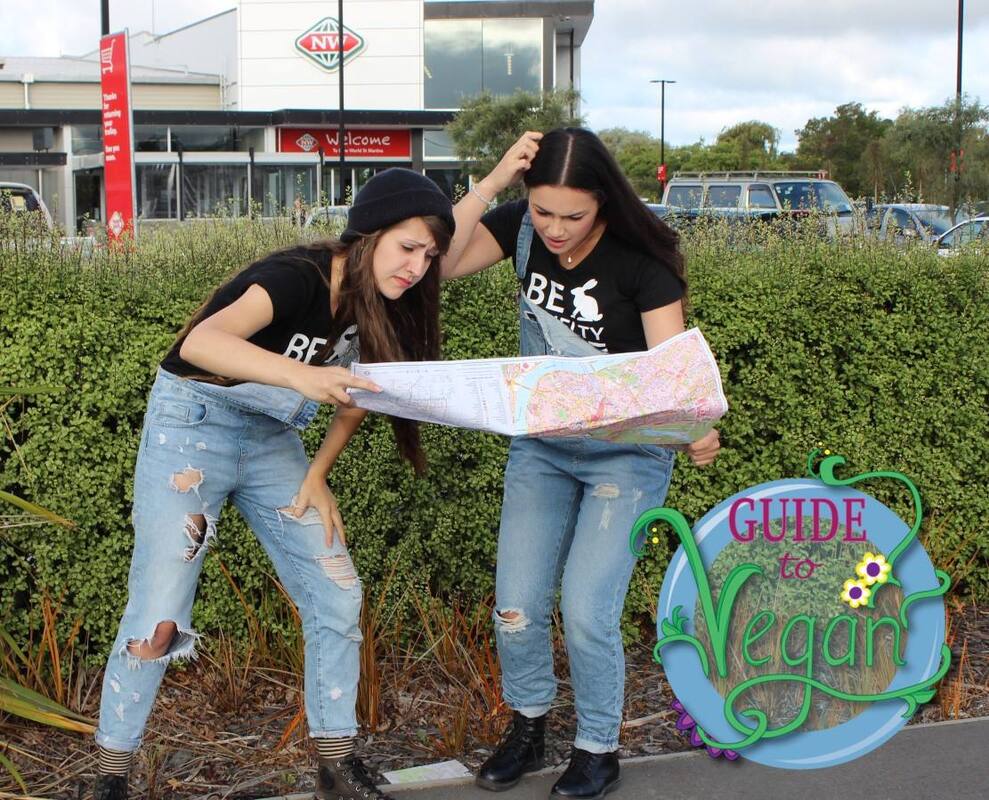