interview with Philip McKibbin
Te Rata Hikairo (Ngāpuhi) is a kaiako, former politician, and activist. He established Corned Buffet, a Facebook page which supports Māori and Pasifika to transition to plant-based diets. A kaimanga himself, he is a passionate supporter of plant-based initiatives.
https://www.facebook.com/CornedBuffet/
​But more basic than that, all of the ika that get taken from the moana – that, by the way, aren’t really that healthy because they’re filled with mercury, right? We’re making a positive impact on the sea when we stop eating fish, particularly when the fish stocks are being depleted. We’re making a positive impact on the land when we stop eating land animals, because the intensification of farming has a really bad impact on the land. And, again, greenhouse gasses from beef production is astronomical. And the fact that we’re losing the Amazon mainly to cattle grazing for McDonald’s and Burger King.
What connections can be made between veganism and mātauranga Māori?
​The kaupapa about kai and respecting Tāne, Rongo-mā-Tāne, Haumia-tiketike, Tangaroa, Papatūānuku, and Rangi-nui. This is very much Kaupapa Maori. Veganism helps Rangi and Papa by impacting climate change, it honours Tangaroa by taking care of the sea and its resources, and the same for Rongo-mā-Tāne, Tāne-mahuta and Haumia-tiketike.
​Our tīpuna ate birds, fish, shellfish, et cetera, and that was at a time when we had massive stocks, and there was a way that we could easily control resources, and we weren’t raping resources and destroying them and depleting them. It’s easier to talk about things from a religious perspective than from a cultural perspective – you know, there’s no, ‘You must eat this.’ in te ao Māori. There’s no rule that, ‘You must eat this, you must eat this.’ It’s, ‘That it is available, and it is possible to eat it.’ That’s very different to ‘To be Māori, you must each such and so.’ But yeah, our tīpuna ate everything, and again that was at a time before colonisation and commercialisation and capitalism destroyed the resources of the world. 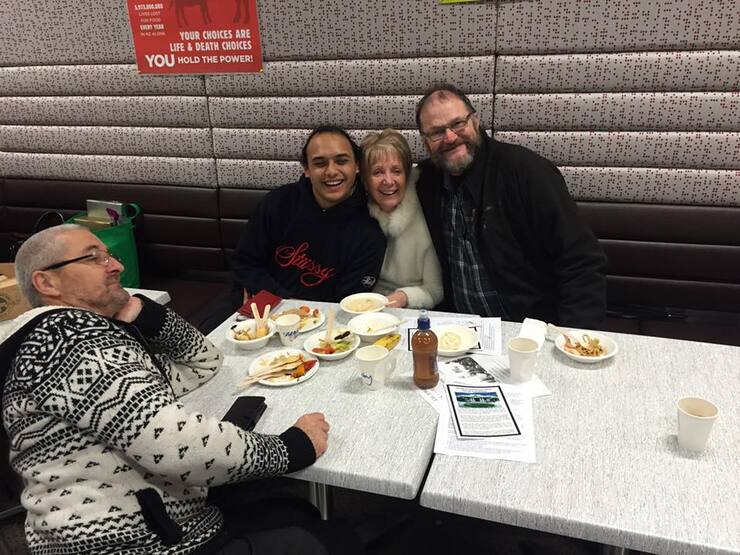 Te Rata with friends at a vegan festival.
In the past, you've spoken about rāhui. How does this concept relate to veganism?
​There are ways to honour atua Māori, to honour the resources they give, and to protect the Earth and Sea. These ways are numerous. Rāhui is one way available to us quickly ensure that we allow resources to self-replenish.
​Rāhui is a Māori cultural concept, and it’s about the preservation and replenishing of resources, essentially. It’s a concept that we have in te ao Māori to replenish resources – to allow animal resources, plant resources, whatever kind of resources, to replenish, so that they can be used again in the future if so needed. If it was deemed that those resources would be needed again, you’d give them time to replenish. So that’s what rāhui is.
​If we were really pro-te taiao and pro-whakaaro Māori, in terms of looking after Papatūānuku and Ranginui, then the natural intellectual progression for te ao Māori would be, ‘Let’s rāhui a whole lot of animal-based products, all of them.’ If we were really true to what it meant to be tiaki o te taiao and be kaitiaki of Ranginui and Papatūānuku – if we really did view ourselves as kaitiaki of the Earth, kaitiaki of the Sea, kaitiaki of the Heavens, kaitiaki of the Land – then we would rāhui a whole lot of products, rāhui a whole lot of animals, a whole lot of fishes, a whole lot of birds. We’d rāhui the lot, because we know that not just in Aotearoa but in the whole world – but particularly in Aotearoa – there’s so many resources that are pretty much depleted, and there are so, so many of our species that are just extinct since colonisation. If we came from the point of view of trying to save them so that they could survive, we’d rāhui all of them, but it would not seem that we’re thinking in that way. And just like every other culture, we’re just as colonised and capitalist as any other culture in the world. If we were really serious about it, we’d rāhui the lot – but we’re not, as a people.
​If we were on the waka of tiaki i te taiao as a planet, right – not just as one country, but as a planet – of tiaki i te taiao and a plant-based diet – there wouldn’t be a point again in the future where animal-based diets would make sense. If it was something the whole planet was doing, it would not make sense. In pre-Mughal India, the whole population was vegetarian; and when the Mughals dominated India, they started to eat meat. But you still have massive, massive chunks of India – millions, millions of Indians – that are vegetarian, even vegan, and for those people it makes no sense at all to introduce animals into their diet, even though there are millions of meat-eaters in India, too. So yeah, if that was on a global scale where everyone was vegan, it would not make sense to have animals as part of our diet. Even if the whole world went vegan, it would probably take 100 or 200 years, maybe 300 years, to replenish our resources at such a time where it would be okay to use those animal-based resources again, so it wouldn’t make sense anymore – in my opinion. That’s all speaking from the hypothetical. 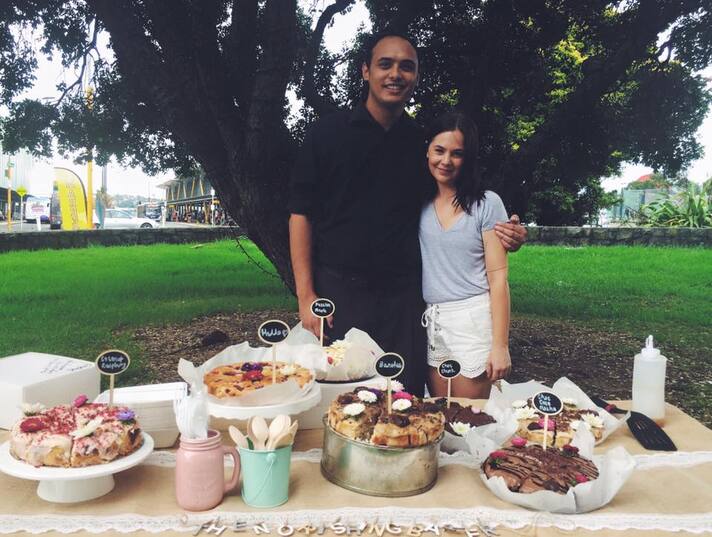